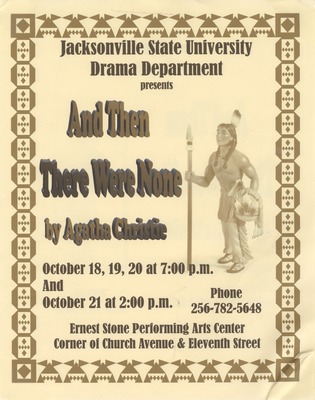 Performed: 18-21 October 2007; Agatha Christie's "And Then There Were None" is a mystery about ten strangers who were invited to a remote island. Weather strands them on the island and a mysterious voice accuses each guest of murder. One of ten Indian figurines disappears and one of the guests falls dead. The director was Wayne H. Claeren, scenic designer was James Ebert, costume designer was Freddy Clements, lighting design was by David Keefer, sound design was by Adam Ellis, technical director was Daryl Pauley, stage manager was JoAnne Whetstone, assistant stage manager was Rachel Bagley, light board operator was Kim Stark, sound board operator was Matt Tyson, costume shop manager was Randal Blades, costume mistress was Charity Sellers, scenic artists were Amanda O'Hern, Joshua Whitt, box office Jan Rhodes, and producer was Carlton Ward. This item is contained within the Theatre & Film Production Archive.

Jacksonville State University, "And Then There Were None (2007) | Poster" (2007). Department of Theatre & Film Performance Archive | Images. 8265.
https://digitalcommons.jsu.edu/productions_images/8265