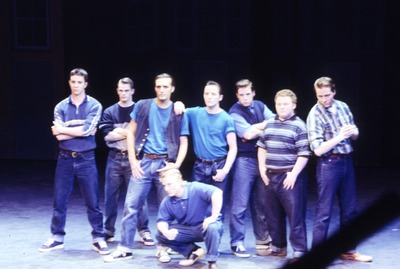 Performed: 19-22, 26-29 February 2004; Leonard Bernstein and Stephen Sondheime's "West Side Story" is set in the streets of New York. Two idealistic lovers are caught between warring street gangs, the Jets and the Sharks. The play was directed by Wayne Claeren, vocal direction was by Teresa Stricklin, orchestral conducting was by Mark Fifer, set design was by Carlton Ward, costume design was by Freddy Clements, choreography was by Linze McRae, David Keefer was technical director, and Rick Gwin was stage manager. This item is contained within the Theatre & Film Production Archive.