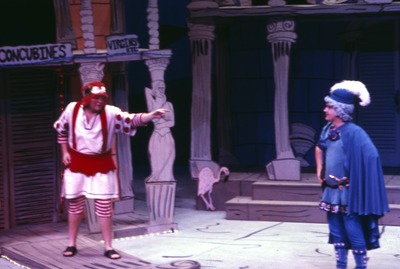 Pictured: Jason Bozeman, Ryan Russell; Performed: 13-23 February 1997; "A Funny Thing Happened on the Way to the Forum" was a traditional comedy set in third century Rome about a young boy in love with a young girl. The play was directed by Dr. Wayne Claeren, stage design directing by Carlton Ward, costumes by Freddy Clements. This item is contained within the Theatre & Film Production Archive.