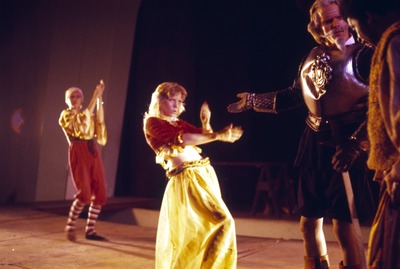 Performed: 21-25 October 1975; Pictured: Whit Davies; Dale Wasserman's "Man of La Mancha," a broadway musical, was presented by the drama department under the direction of Wayne Claeren, designer Carlton Ward, and orchestra director Ron Surace. Harriet Payne was choreography director, Dr. Dan Marsengill was vocal instructor, and Susie Francis was rehearsal accompanist. The musical was based on Cervantes' "Don Quixote." The play takes place in an underground prison where Don Quixote performs and sings. This item is contained within the Theatre & Film Production Archive.

This performance was held in the Jacksonville High School Auditorium.