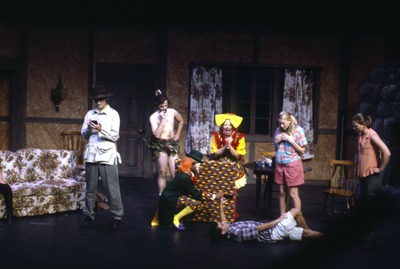 Pictured: Chauncey Slater, Brian Seitel, Coty Cockrell, Britani Mason, Leesa Tucker, Steven DiBlasi, Ashley McDonald; Performed: 22-25 June 2006; Wayne Claeren's "The Curse of the Porcupine’s Ear" is a comedy mystery set in a rustic cabin in the woods. Two honeymooners retreat to the woods to be alone, but are frustrated by invasions of many odd characters. The play was directed by Wayne H. Claeren, scenic designer and producer was Carlton Ward, costume designer was Freddy Clements, lighting design and technical director was David Keefer, sound designer was Adam Ellis, stage manager was Chris Whetstone. This item is contained within the Theatre & Film Production Archive.