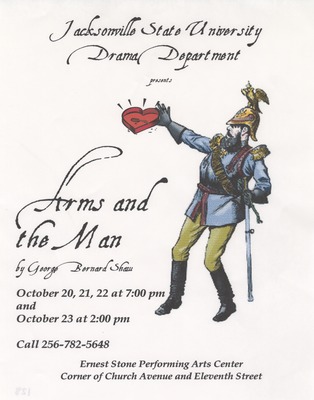 Performed: 20-23 October 2005; George Bernard Shaw's "Arms and the Man" is an epic poem in the old tradition of Homer written during the time leading up to WWI. The play is set in Bulgaria during the brief Bulgarian-Serbian war in the 1880s. The play was directed by Dr. Wayne Claeren, scenic designer was Carlton Ward, costume designer was Freddy Clements, lighting designer was Wil Robinson, sound designer was Daryl Pauley, technical director was David Keefer, stage manager was Sandy Knight, assistant stage manager was Dustin Stilwell. This item is contained within the Theatre & Film Production Archive.