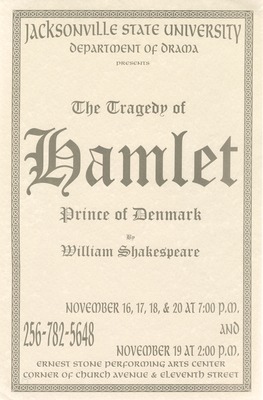 Performed: 16-20 November 2000; William Shakespeare's "Hamlet" was presented by the drama department in commemoration of the 400th anniversary of its first performance in London 1600. Hamlet is a tragedy set in Denmark. Prince Hamlet takes revenge on his uncle Claudius who murdered Hamlet's father in order to seize his throne and marry Hamlet's mother. The play was directed by Dr. Wayne Claeren. This item is contained within the Theatre & Film Production Archive.