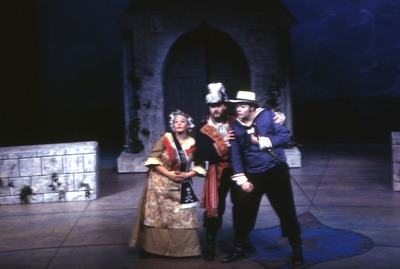 Pictured: Jason Bozeman, Meredith Morris, John Woods; Performed: 19 February - 1 March 1998; Gilbert and Sullivan's "The Pirates of Penzance" tells the story of Frederic who is destined to be a pirate in 1880s England despite his intentions. The play was directed by Wayne Claeren, vocal direction given by Jane Holloway, costumes by Freddy Clements, set design by Eric Key, and orchestra conducted by Carl Anderson. This item is contained within the Theatre & Film Production Archive.