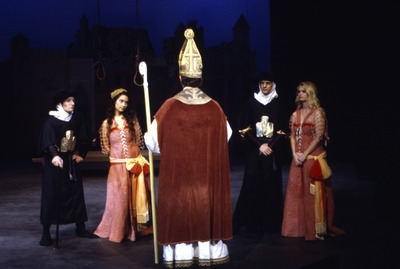 Pictured: Allison Crawford; Performed: 14-18 October 1993; Peter Barnes' "Red Noses" is a comedy set in France during the plague known as The Black Death. The play was directed by Wayne Claeren, set and lighting by Carlton Ward, costumes designed by Freddy Clements. Supervisor of T.V. Services Evin Thompson produced the video shown at the end of the play. This item is contained within the Theatre & Film Production Archive.