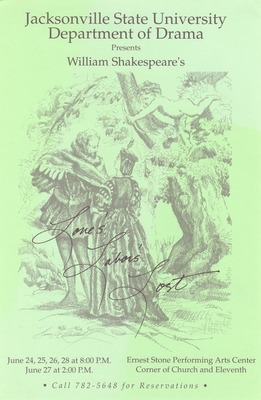 Performed: 24-28 June 1993; William Shakespeare's "Love's Labor's Lost" was presented by the department of drama. The entire action of the play took place in the woodland park of the King of Navarre and centers around the King and three of his friends hosting a princess and her three ladies after vowing to avoid women. They fall in love and decide to court the women. The director was Wayne Claeren, scenic designer and producer was Carlton Ward, costume designer was Freddy Clements, sound/light design and technical director was David Keefer, stage manager was Mishia Burns, assistant stage manager was Myra Gaddis, costume shop manager was Joyce Tate, box office manager was Jan Rhodes. This item is contained within the Theatre & Film Production Archive.

This performance was held in the Stone Center Theatre.