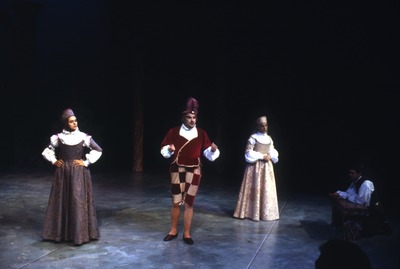 Performed: 6-9 July 1989; William Shakespeare's "Comedy of Errors" was presented by the drama department under the direction of Wayne Claeren. The play takes place in the streets of Ephesus and tells the story of two sets of identical twins who were accidently separated at birth. Scenic and lighting designer was Carlton Ward, costume and makeup designer was Freddy Clements, technical director was David Keefer, stage manager was Joyce Tate, and assistant stage manager was Betty Jeanne Gosdin. This item is contained within the Theatre & Film Production Archive.

This performance was held at the University Amphitheatre adjacent to the Ernest Stone Performing Arts Center.